The current system was slow, complex, clumsy and led users to mistakes instead of helping to avoid them.

Increased maintainence as a result of inconsistent layouts

Took a lot of time to find important functions

My first step of any project is to develop empathy with the users. I conducted interviews and Contextual Inquiry sessions with users and internal stakeholders. It was also important to get the domain knowledge and understand terms like Procurement, Cost Data, Scope Development etc.

Working closely with the Gordian Cloud team throughout this project helped give insight into the customers and their perspectives while using the platform. The research I gathered provided knowledge that drove the interface updates, enabled me to consider their context while building interactions, and highlighted the problems they had that the product was designed to solve.

Since I was redesigning an existing application, I performed a UI Audit.

I facilitated the following activities throughout the research and discovery stage:

Once research was completed, I did an immediate debrief with leadership to report highlights of the research findings. The next steps were to dive deep into the findings to better understand and organize the complexities and problems discovered.

User personas were the foundation for a solution that would be not only aesthetically pleasing but, most importantly, highly practical and usable. Here, it was crucial for me to get in touch with the people who were using the solution every day. I built personas by conducting in-person interviews with internal stakeholders and end-users.

I made the company aware of users’ needs, emotions and pains. It was also important to communicate the everyday routines and duties of different user types.

The users felt that the current solution was overloaded and complex. Even after many years of working with it, a user still didn’t understand all the functionality. Unfortunately, instead of helping, the current software created friction.

Based on my research findings, it was enough to create three primary personas:

The creation of these three personas allowed us to get a detailed look at the users Jobs-To-Be-Done (JTBD) by putting digital interactions into real-person experience and context.

We discovered a lot of struggle and negative emotions caused by the existing solution. This allowed me to create empathy maps, collecting what users think and feel about executing their duties. Empathy maps provide valuable context for the Jobs-To-Be-Done.

I utilized the following activities throughout the analysis and synthesis stage:

This stage allowed me to implement all of the ideas created through research and synthesis. At this important juncture, I turned my vision of an ideal user experience into the architecture and operation of the new platform.

I tried to make the new JOC solution as simple and easy to understand as possible. I created one overall architecture for the entire solution and three smaller ones for each of the user personas. This allowed everyone to understand the differences of information we should include to keep the product intuitive and holistic.

I tried to make the new JOC solution as simple and easy to understand as possible. I created one overall architecture for the entire solution and three smaller ones for each of the user personas. This allowed everyone to understand the differences of information we should include to keep the product intuitive and holistic.

I facilitated the following activities throughout the engineering stage:

FAIL FAST. I learned that facility owners need a solution that gave them visibility into exactly where the job orders were in the JOC process, which documents were required and what actions to take. My first assumption was that facility owners would want to see this in a single view with each stage represented in a collapsible section — but after testing, I realized that this type of view was not conducive to properly informing facility owners, and quite frankly, produced too much cognitive load.

I began exploring solutions that provided a snapshot view of the current state of the job order. This would allow facility owners and account managers to be informed of what is most important to them and take the necessary pending actions.

The first high-level issue I noted was an inconsistent layout for different parts of the app (one for Contractors, and one for Facility Owners). This was identified as a maintainability issue that was a known area of technical debt for Gordian Cloud's tech team.

Having one layout with consistent patterns and identifiable architectural areas would give all users a consistent experience as well as enable the team to continue to create new, stable features for their customers.

The design concepts began with simple, low-fidelity wireframes. This format allowed me to generate multiple ideas and communicate their intent with Gordian Cloud's team without investing too much time or energy into options.

In order to create a familiar layout, the decision was made to align both areas of the divergent design into one traditional dashboard-style layout. This included a sticky sidebar and a scrollable content area.

Identifying the key brand colors and the theme for the application enabled the creation of a palette of accessibility-tested and reusable colors.

Colors derived from the brand were selectively used for focused call-to-action behaviors and interactive states. While the palette of colors chosen purely for the app elements reflected a sense of consistency and predictability based on the hierarchy of the element in the interface.

I used the insights learned from the previous OOUX activity to define contextual navigation for each primary object. This allowed users to easily navigate to any and all related entities from within an object's detail view.

Forms are one area of an application that can be easy to overlook during an evaluation of the efficacy of the interface. In Gordian Cloud’s case, the forms suffered the common pitfall of inconsistency and disorganization.

To address the visual disorganization of forms with categorized sections, I designed a new single column layout for all forms. Within this layout, I logically grouped form fields using fieldsets. These updates created a more readable, efficient experience while filling out extensive forms.

For validation, and overall form group structure, I reorganized the layout to display the field label, help text, error message and input, in that order.

I also created a decision matrix to ensure that designers and developers used the correct form elements in given situations.

One could argue that the ability to search the JOC catalog for materials was the single most important feature of the platform. As it stood, the search user experience was sorely neglected, and as a result, a common pain point amongst users.

Upon auditing the current search UI, I suggested a complete UI, usability and search algorithm overhaul. I'll cover this breakdown in a subsequent case study.

This is my favorite stage. It's where the vision really begins to manifest itself and users provide invaluable feedback.

I chose to code a real, functional prototype using HTML, CSS and Javascript. This allowed users and stakeholders to easily test and validate complete flows on various devices.

In addition, a real prototype eliminates throw-away artifacts. Developers can easily integrate their services and port working code directly from the prototype.

User testing was done early and often. It was moderated on-site and involved creating carefully thought-out scripts of various tasks.

After each user test, I would debrief with the Gordian Cloud team and iterate on the prototype based on test results. This process could involve many rounds.N

The crux of the application is around building, reviewing and approving price proposals. I worked with users to design a collaboration feature that allowed them to accept/reject proposed items, add notes to a decision, as well as see if anyone else was editing the proposal at the same time...a la Google Docs. 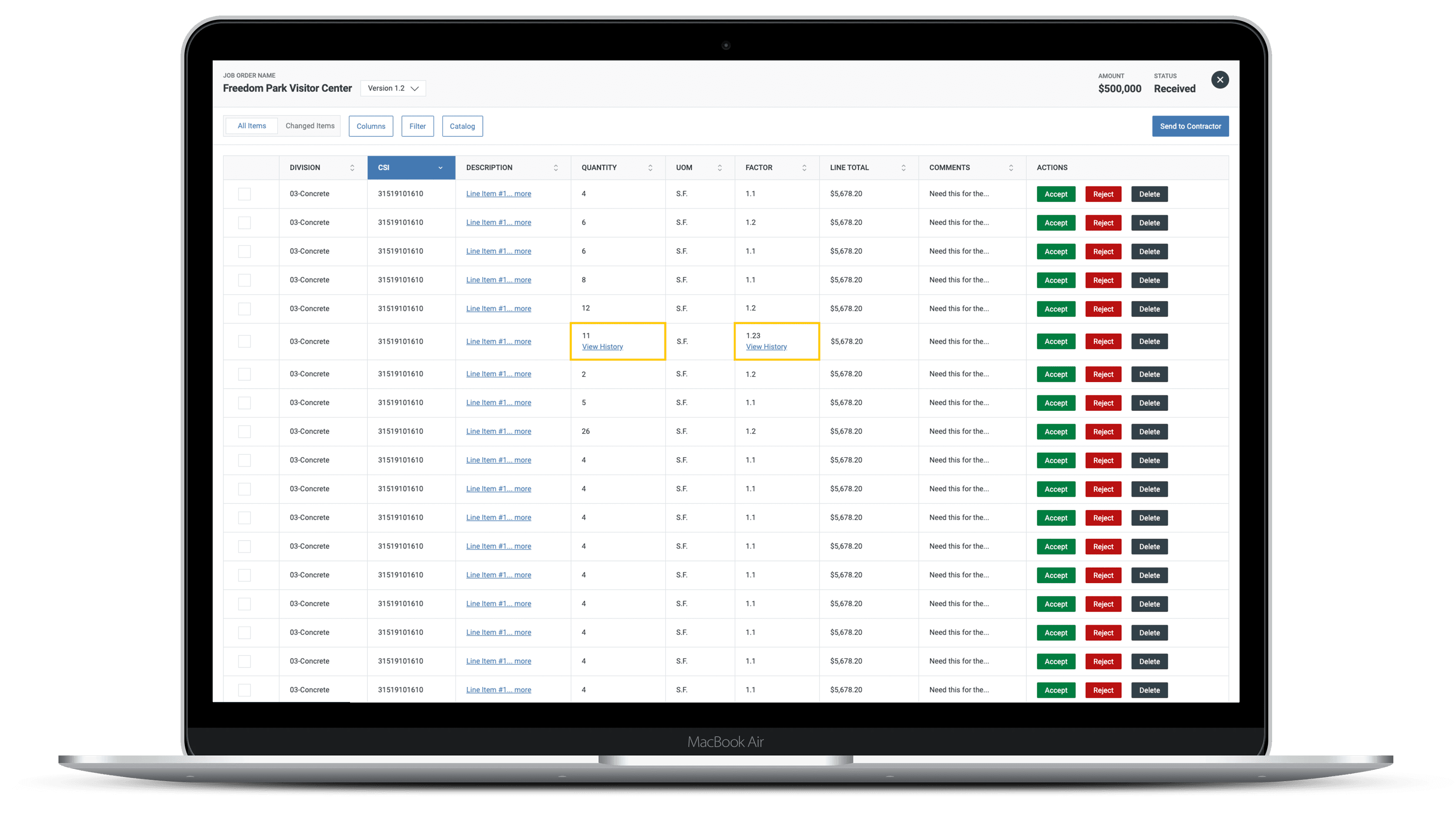 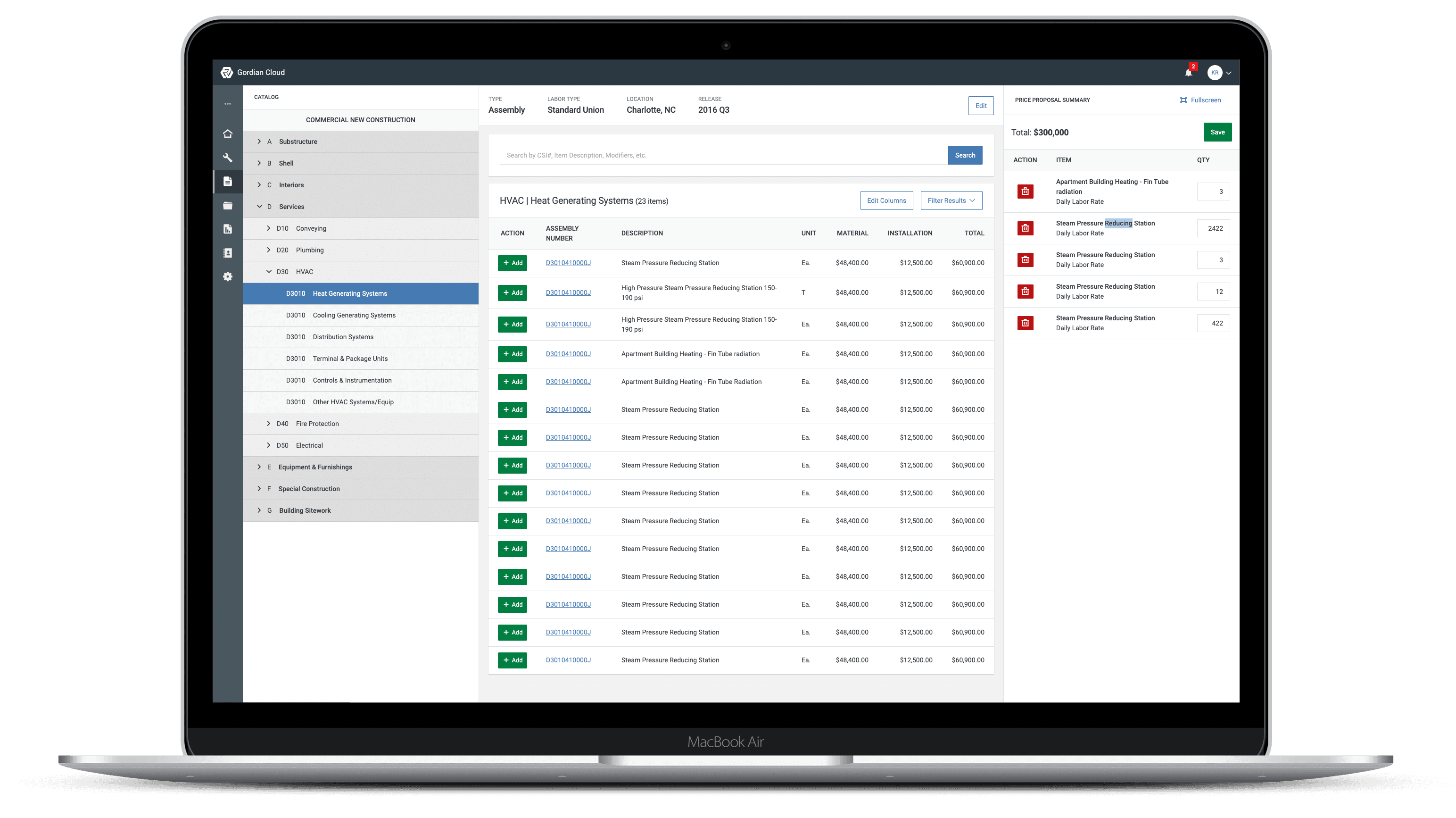 "Where are my job orders?"

Account Managers needed a birds eye view of the state of all their job orders. 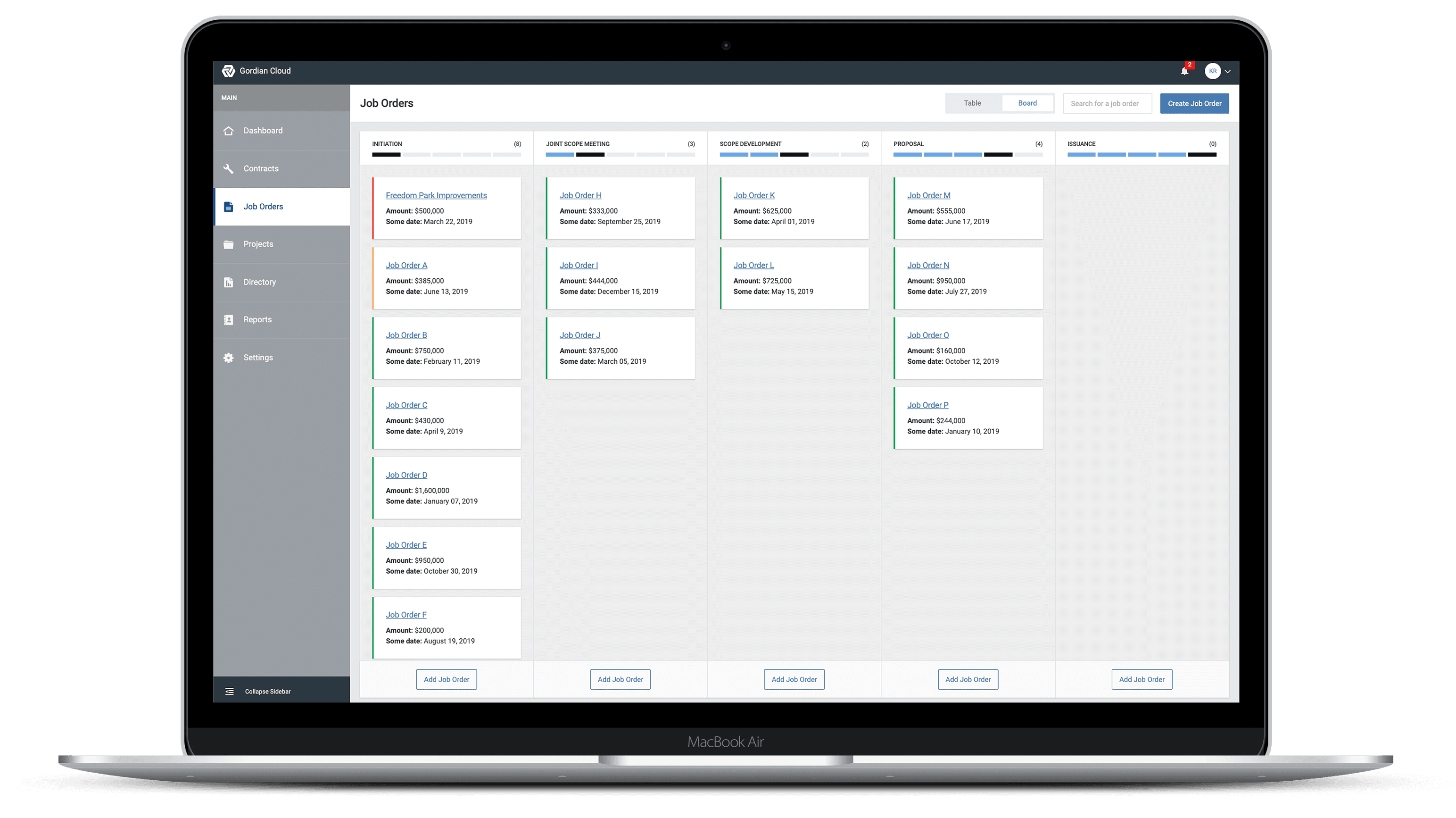 "What's the status of my job order?"

Facility owners needed to know exactly where their job orders are within the JOC Workflow to prevent missing important contract dates and stay within budget. 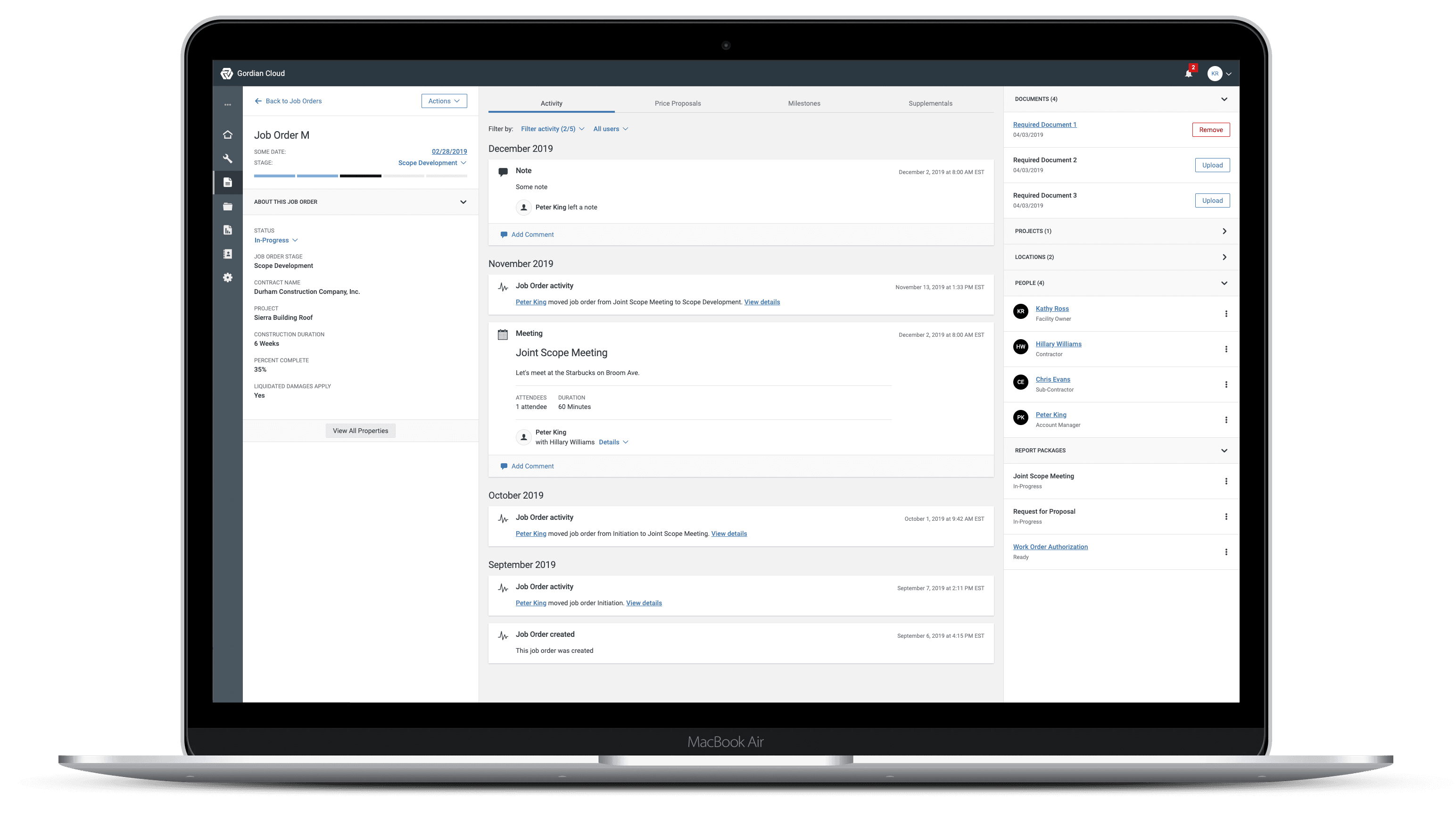 As I mentioned earlier, the current system had no common visual language or underlying front-end code to connect its library of web apps. Instead, every web project started at square one, with developers piecing together design solutions in isolation. Time after time, they rolled out reinvented wheels.

The result of this ad hoc process: developer productivity was slower than it might have been, quality was uneven, the user experience changed from app to app, and most visual designs didn’t reflect the company’s brand.

My strategy for promoting understanding and adoption of the framework was easy to use would naturally fit the developers' workflow (Angular). This strategy involved equipping developers with "Angular-ready" cust-and-paste code snippets for each component, in addition to static HTML.

I adapted Gordian's existing brand guidelines to fit the needs of modern web apps. I had to account for every interactive element and component state, such as hovered, focused, active and selected — and make sure they were consistent.

Underneath the hood, I developed a CSS architecture using ITCSS and BEM that would be friendly to maintain and stand up to large-scale collaboration. The class naming is easy to understand and obvious to extend; it’s effectively self documenting. All of this makes the system fast to learn, inviting contribution and extension by developers.

Each component that BUILD showcased went through a rigorous process to make it to the big leagues!

The OOUX activity I did during the engineering stage helped inform the shared conceptual model for Gordian Cloud. It describes the product's primary objects and how they interact.

A shared language helps designers, developers, support and help doc authors all use the same word to describe the same thing, so organizational fogginess goes away. It's important that everyone uses the same language from code to customer.

Ready to Use Templates

I created several starter templates for common scenarios and Gordian Cloud workflows. Developers can get these up and running to test the system and start building their own apps fast.

I optimized the CSS styles for flexibility so that developers could extend BUILD for specific departments or sub-brands.

In order to better serve customers, I think a service marketplace is needed to integrate with some of their existing systems. From there, we could import information about important dates and improve third-party communication.